Essential if you care

Many of us worry about ‘saying the wrong thing’ to someone with dementia, yet a friendly face or listening ear can make the world of difference.  This Dementia Action Week, the Alzheimer’s Society are encouraging everyone to take action by starting a conversation – young or old, friend or family, over a cup of coffee or during a car journey on the way to somewhere – it’s time to start talking!

Becoming a dementia friend this week simply means learning more about dementia, putting yourself in the shoes of someone living with the condition and turning your understanding into action.  Start that conversation today and Ask Us Anything!

One of the most common questions that is asked in varying ways is ‘what is the difference between dementia and Alzheimer’s’ disease’.  To put it simply, dementia is not a disease in its own right.  Dementia is the name for a group of symptoms that commonly include problems with memory, thinking, problem solving, language and perception.  Dementia is caused by different diseases that affect the brain. 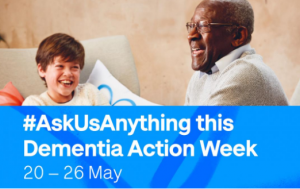 Some other common types of dementia include vascular dementia and dementia with Lewy bodies.  While there is a relationship between dementia and Alzheimer’s disease, there are key differences between the two.

When a person receives a dementia diagnosis, they should also learn what type of dementia they have.  This is not always the case, and sometimes the term ‘dementia’ is used to describe the symptoms they may be experiencing. These symptoms might include memory loss or difficulties with language or concentration.

Dementia is caused by diseases which damage the brain by causing a loss of nerve cells.  Alzheimer’s disease is one specific cause of dementia (and the most common).  Some other causes of dementia include: 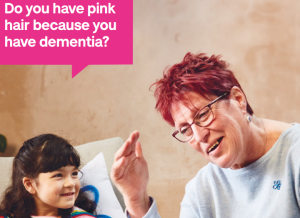 The symptoms that someone with dementia experiences depends on the damaged parts of the brain and the disease causing the dementia.  Dementia is progressive which means it will get worse over time.

What is Alzheimer’s disease?

Alzheimer’s disease is a physical disease that affects the brain.  Abnormal structures called ‘plaques’ and ‘tangles’ build up inside the brain. These disrupt how nerve cells work and communicate with each other, and eventually cause them to die. There is also a shortage of some important chemicals in the brain of someone with Alzheimer’s disease. Reduced levels of these chemicals mean that messages don’t travel around as well as they should.

Alzheimer’s disease is the most common cause of dementia and usually begins gradually with mild memory loss. The person may have difficulty recalling recent events or learning new information. Other symptoms may include difficulties finding the right words, solving problems, making decisions, or perceiving things in three dimensions.

As Alzheimer’s progresses, problems with memory loss, communication, reasoning and orientation become more severe.  The person will need more day-to-day support from those who care for them.

There is currently no cure for Alzheimer’s disease.  However, treatments may temporarily ease some symptoms or slow down their progression in some people.

Can I help a family member or a friend with dementia?

YES!  Whether you are a full-time carer for a someone with dementia or you are part of a larger care-circle, there are lots of different ways you can help a friend or loved-one that has dementia.  Start by having a conversation and don’t forget to Ask Us Anything! 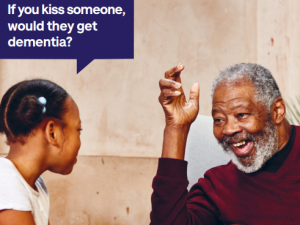 Being a full-time carer can be a rewarding experience, but it can often feel lonely, tiring and as though you are never doing enough.  These feelings are all normal and are felt by most carers at one time or another.  The Alzheimer’s Society has a great resource on their website offering advice, guidance and real-life stories.  They also talk about looking after yourself as well as the person you care for and if you are experiencing feelings of guilt, how to manage those feelings.

Dementia affects people in different ways and research is continuing on how best to support everyone, however it has been recognised that the following does bring comfort (and a smile!) to those with dementia and those supporting them!

MyLiferaft is a free resource which gives an individual and those who support them one central online place where they can add, manage and share information about health, care and well-being.  Using MyLiferaft reduces the need for repetition and explanation every time someone new comes into the care circle, helps improve consistency and is truly centered around the person and their needs.

At MyLiferaft, we aim to give you everything you need in once place and this includes where to go for advice, information and support.  Our extensive list of resources has a specific section for those with dementia with links through to organisations such as the Alzheimer’s Society, Dementia UK and Dementia Action.  There is also a full list of resources on a wide range of topics including Bullying, Going Back to School, Bereavement, Mental Health, Autism, Epilepsy, Benefit information and various NHS information websites.

We use cookies to ensure that we give you the best experience on our website. If you continue to use this site we will assume that you are happy with it.Ok